Years ago, when I got the news that I had received the fellowship for graduate school in America, my friend Guillermo (the one from Buenos Aires), who was then my flat-mate, gave me a stern warning: “Jaime, you see how you’re sitting right now, with your legs crossed? Don’t ever do that in America, or they will think you’re gay … or European”.

The “or European” part was good enough for me, so I’ve continued to cross my legs in this country. I’ve asked some friends, and they have confirmed that Guillermo was indeed right. There are many other examples of things that are common in Europe, but taboo here. One is smell. I’ve made some American male friends very uncomfortable by asking them what their favorite cologne was. “Cough. What?… Me?, I never use cologne. I just slap on some aftershave!” they would retort. Describing smell is seen as womanly, unless it is to prove your knowledge of wine or food.

On Friday, an acquaintance from New York, Yanis, contacted me, as he was in Seattle for a conference. Yanis is Tunisian-Swiss, and grew up in Switzerland and France. We caught up on Saturday, and of course, as we Europeans do, made fun of the things that we find silly in this country. I took him to Discovery Park, and we were supposed to join Emily, Christina, Elia and J.P., for drinks, after we were back and they were done watching Batman. As it happened, Yanis was tired after we had dinner, so I dropped him at his hotel. I then met the others in a bar in my neighborhood. After a while, we left, as they wanted to dance, and we went to a club the guys knew.

The place, that night, was playing techno music. Another thing that means “European or gay”. Yes, the bar had a strong gay contingent, and the go-go dancers were male. We had a drink, and then left. I was finding the music ok. Not the best selection, but for my ears, techno is almost always better than hip-hop, the stuff that puts Americans on the dance floors. After that, we ended up coming to my apartment, and having a mini-party. I mostly have electronica, and almost no hip-hop, but J.P. had his iPod on him, so we hooked it to my hi-fi set, and the Americans were happy. We stayed up pretty late, it was a good time. 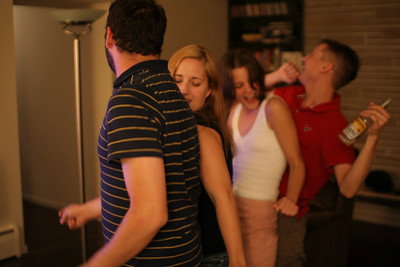 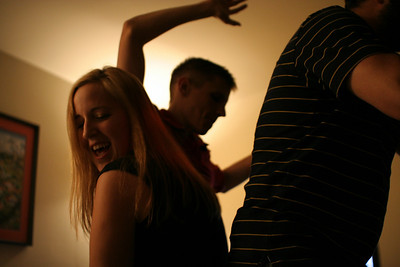 Today, Sunday, I wanted to go to Alki beach, in West Seattle. The water was too cold to bathe, and I didn’t want a beach plan, but I had never been there, and had heard good things. I brought Yanis along. I found the area very nice, so I will definitely go more.

We then went back to downtown, and were joined for dinner by a Brazilian woman Yanis had befriended during the conference. I chose one of the serious restaurants in the city, something I hadn’t done so far. I had beet soup and Alaskan salmon, and both were very good. The wine was good too. There were a couple of details that surprised me in the service; very apparent - but harmless. They just served to contrast with New York. I got tired of the restaurant obsession there, but a nice consequence is that there are very good restaurants and very good delis and markets. Here, I’m happy to rely much more on my cooking.

It was a good dinner. The Brazilian woman and I allied to make fun of Yanis, who, being brought up in France and Switzerland, can be pretty snobby about wine and food, and other things. National differences can be a good source of comedy. But back to the theme of this post: why is it that only gay Americans have good taste?