Adventures in the rainforest

Every now and then, things go wrong the right way.

This weekend I had organized a hike in the Olympic peninsula, since the hike JP organized two weeks ago went so well. The Olympic peninsula is about a three hour drive from Seattle, so I wanted a two-night stay, to make it worthwhile. My idea was to leave on Friday around 1pm, and hit the mountains in the North, or the rainforest and the coast in the West. Over the week, email went back and forth with different ideas, and in the end we left Seattle around 3pm, still with no final decision about where to hike.

We had to catch the ferry to get across Puget Sound to the Olympic Peninsula, and once there, reach Port Angeles before 7pm for a wilderness camping permit. The ferry ride is only a half hour, but we had to wait in line two hours to get on. Elia and JP had left a bit later than us, and the traffic jam delayed them to the next ferry, 40 minutes after ours.

It was a very nice ride, but we arrived in Port Angeles past closing time. Luckily, we found out that presence of the rangers is only necessary for restricted areas. Once JP and Elia arrived, and we decided where we would be camping, we filled in the necessary documents, put the dues in an envelope, and left them in the drop box. 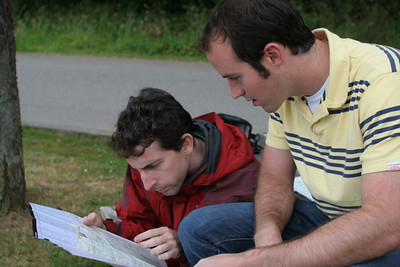 After dinner at a Chinese place in Port Angeles, we left with the intention of camping by Lake Crescent, in the North. However, there were no spots left there, nor in the next camping ground, and we were about to admit defeat, and go to the town of Forks to sleep, when we checked the last camping ground on the way there. We found a great spot for our three tents, next to our two cars. It was past midnight. We quickly built the tents, and stayed out chatting until we were cold and sleepy.

It rained lightly that night. In the morning everything was wet, and the idea of cooking breakfast gave way to the idea of brunch in the town of Forks, which was on our way to the coast. We stopped at a breakfast joint, whose mediocrity we ignored because of the excitement of the trip. In Forks, JP, Elia and Emily needed to buy gear they had forgotten to bring, like sweaters or raincoats. We were now on our way to the Pacific coast. 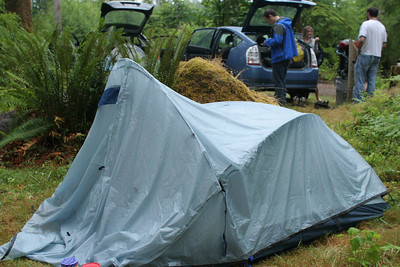 The West of the peninsula is taken by fantastic wild beaches. We stopped at Kalaloch, which is on the way to the rainforest. I had been in a neighboring beach three years earlier with Andrea and Guillermo, and it had left a strong impression. Like that time, the sky was overcast, which lent the Pacific, and the numerous trunks pushed ashore by the waves, a magical quality. We spent an hour there, breathing the sea air, walking and playing with the waves and the tree trunks. 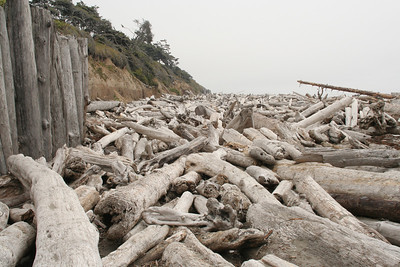 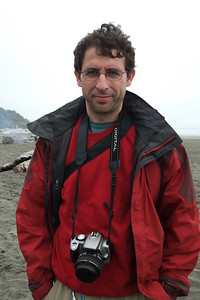 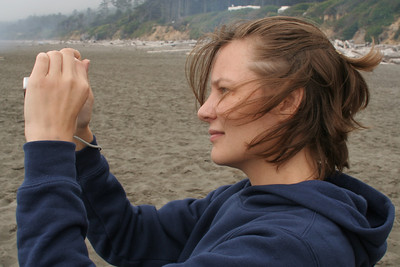 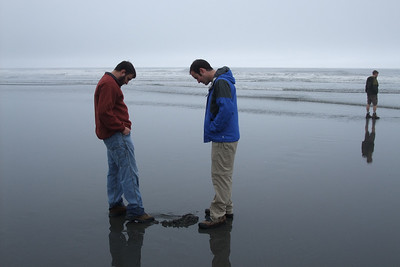 It was time for the main event: the Quinault rainforest. The rainforests in the Olympics are considered to be one of only three temperate rainforests in the world, the others being in New Zealand and Argentina. Even from the car, the place seemed especially full of moss and ferns. By the time we left the car, it was 5pm. There was a spot where we could camp, Wolf Bar, about 4 kilometers (2.6 miles) in, and we had decided that it would be our safety, but we’d try to camp in Elip Creek (9 kilometers - 6 miles in), if we were feeling well. That turned out to be the case. When we found Wolf Bar, we all felt like more exercise. 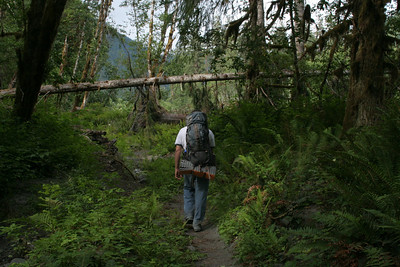 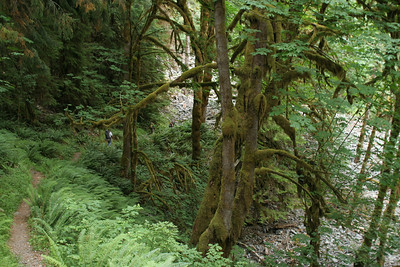 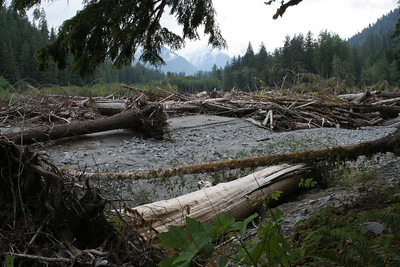 After a while, the terrain gained inclination, a drizzle started, and the sun was going down. We thought we had found our camp, but we were wrong. JP and Paul, who had been Eagle Scouts, said there were bear prints in some areas. Bears are generally not a cause of concern, unless people are careless to leave food, or even creams and soaps with sweet scent, in their camp. Bears tend to avoid humans, but if foraging for food leads them to a camp, and humans, they can become panicked and aggressive. Many camp sites (like the one we were planing to stay in), have bear wires, which are set between trees, high enough to hang bags and backpacks with food and put them above the grasp of bears. 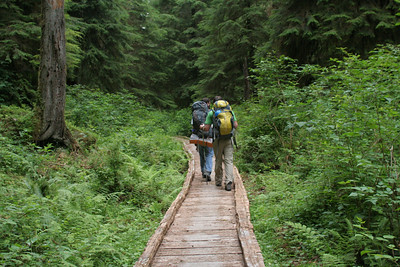 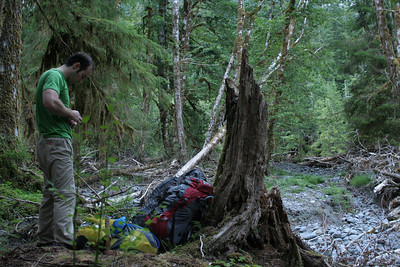 We carried on, as conditions were getting worse. We then came to a steep wall that led to a river bed, where a ladder and a rope helped to climb down. After we were all down, we faced our next challenge: we needed to ford the river. The water wasn’t running very deep, but the curret was strong, and the rocks were slippery. We were concerned about falling in and getting soaked. We kept looking for promising places to ford. Emily pointed at a particular turn, and I followed her. There were rocks close enough to let us through, but we had to be precise. We both crossed, left our backpacks in a dry area under a tree, and went back to help the others. Elia was having trouble with balance, so he passed his backpack to Emily at the other side and she crossed again. After that he was able to make it. We were happy to be through. 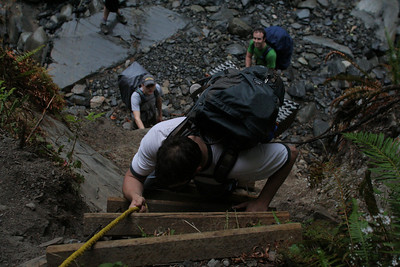 The river crossing had taken us over a half hour, and it was starting to get dark. We took out the map and figured we still had quite a way to Elip Creek. We started looking for good spots, and after a short while, found a flat area guarded by trees. It was perfect. We were concerned about the bears. Luckily, Paul and I had brought rope. While JP, Emily and I built the tents, Paul and Elia arranged a makeshift bear wire, away from the tents. We had a rich dinner. Emily had brought a pack of white wine. This time around, I had bought a chorizo, and while we waited for the dried food bags to cook with boiling water, we shared the chorizo, nuts, cheese and chocolate. I had smoked salmon. Having fish in hikes is not a standard idea, but I think it’s working very well for me.

It was a great dinner. We were all tired from the hike, happy about crossing the river, and exhilarated that we were camping in the middle of nowhere. It was drizzling but we didn’t mind. After chatting for a long while, we put the food in bags, on our bear wire, and walked to the tents to sleep. 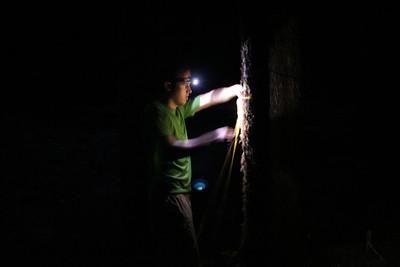 The morning brought the happy realization that our food was intact. We had breakfast, took down the bear wire, stored the tents and started walking back, again in light rain. The river crossing was still intimidating, but this time we knew where to go. After fording, and going up using the ladder and rope from yesterday, it was an easy and long hike back. Whenever we stopped, though, we tended to chat for a bit too long. We had a sense of achievement and ruggedness. We had also functioned very well as a team. Nothing like a little misadventure for one’s ego. 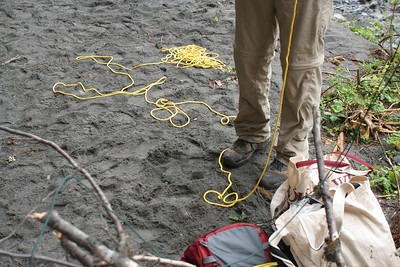 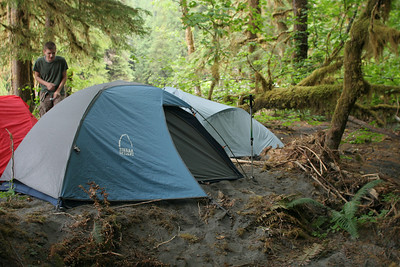 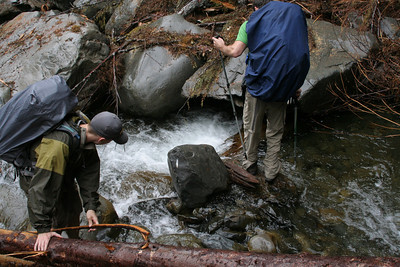 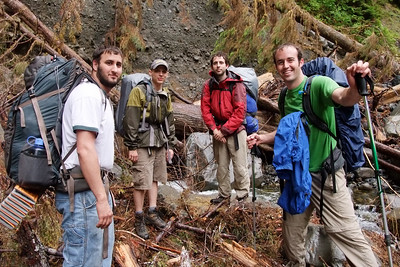 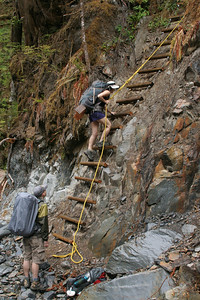 By the time we were ready to drive home, it was 5pm. This time we were going South, then East, then North, around Puget Sound, no ferry crossing needed. After dinner half way, in Olympia, the two cars separated, and we all drove back to Seattle.

You can find more photos in my SmugMug album.