Last week I started bringing my own lunch to the office. I’m using a funny little lunchbox they sell at Whole Foods. 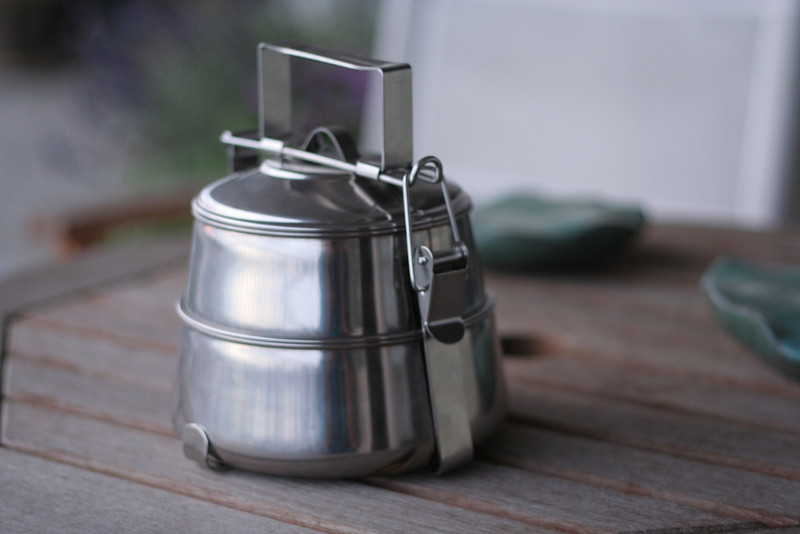 It all started after my office-mate Jon brought his own utensils to the cafeteria. I thought it was a good idea, and started bringing my own too. We wondered whether they would serve us if we brought our own porcelain plates. The answer was no. Fairly typical in America that cafeterias use disposable plastic plates, cups and utensils. Fairly typical, too, that the food is not good. The decision to pack lunch was only a question of time. The thing is, I want to eat properly, nothing like making a sandwich, or a … salad (boring!).

In recent times I’ve been trying to learn how to cook. I’ve been making my own yogurt for over a year; I started doing that because of a recommendation in the book Breaking the Vicious Cycle by Elaine Gottschal, which I found to help a lot with my Crohn’s disease. Now of course, I’m used to home made yogurt, and like it better than store bought, except White Cow Dairy from back in New York, which is the best I’ve ever had.

But back to subject: last month I bought How to Cook Everythig by Mark Bittman, who writes the Minimalist column in the New York Times. I like him because he uses simple methods, but doesn’t compromise on quality. There is a section, for instance, on why you should whip your own cream, never buy whipped. I’m finding Bittman’s claim that you can, without experience, make something better than 90% of restaurants, to be true. As he says, making things from raw ingredients gives better taste. It’s also fun. Last summer I learned how to churn my own butter. Not something I do often, but playing with food and equipment is turning out to be fun.

So far, for my lunches, I’ve had asparagus parmesan, crustless quiche, and pisto (Spanish ratatouille, mom’s recipe), and I’ve been surprised by the big improvement of lunch break. We shall see if I have the discipline to keep this up.