Saturday last week, I took the train to Cologne. Florian and I were going there to run the marathon and half marathon. Cologne boasts an impressive cathedral and several bridges that cross the Rhine. 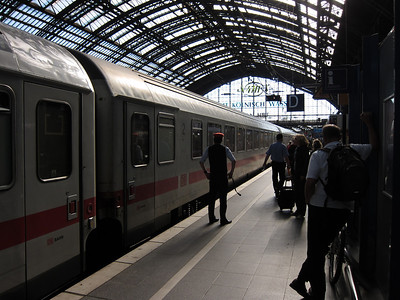 In the morning I had to go to the marathon expo to get our materials for the race. Florian would arrive later in the day. It was beautiful weather, and I strolled around, impressed by the liveliness and the easy rhythm of Cologne. 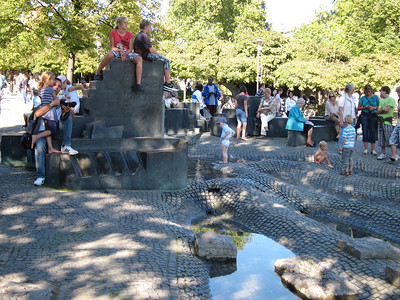 Florian arrived after 6. We had a good walk at dusk, and I was mesmerized by the color of the sky. After a meaty dinner, it was off to bed.

We had breakfast at 8:30 on Sunday, then changed and walked to to start line. The race was to begin near noon.

And so it did. I was concerned with overexerting myself in the first half, and then crashing and burning in the second. The objective was to finish the race. So I put on a pace that was brisk but manageable. If in the half-marathon in June I was pumped up by the drums and the pleasure of running, here I was playing it cooler.

The 21 km mark came, and I was on a very respectable 1:40, a good half-marathon, but 10 minutes slower than my pace in June. Things were looking good. I had spare capacity in the heart and lungs.

I hadn’t even felt the need for food, and I had needed to drink only moderately. For food, I always avoid those glucose packets that many runners and cyclists use. I don’t trust the yo-yo effect from the sugar overload. Instead, I had packed a few squares of dark chocolate.

Around kilometer 28 I noticed that I was feeling a little less comfortable. Manageable still, and still no major pains. But I was starting to lose fluid more quickly, and my mouth was pretty dry. I started then to eat the chocolate. Bad idea! It was difficult to swallow, I wasn’t producing much saliva. It was not until I grabbed some water from one of the refreshment stations that I was able to swallow the remaining chocolate. At this point they had also started to offer food in the refreshment stations, and I grabbed a banana portion.

The kilometers were going by, but I no longer felt I had much spare capacity. Around kilometer 35, I decided to stop and walk a few meters. My legs were feeling the effort. They don’t call it the marathon for nothing! After a bit, I was back on my trot.

I was tempted to quit, but I also knew that I could make it, even if I had to walk the remainder of the way. I had started drinking fluid on all refreshment stations, even a Coke by accident. I ate my remaining chocolate portions, fragments of which would stay in my teeth, and give me an even more haggard look in the race photos.

I stopped to walk two more times, but I was still able to run decently, on autopilot. Crossing kilometer 40 was a relief, but it didn’t bring a jolt of energy or of adrenaline. I had no extra wind left. I crossed the finish line in a huge sigh, proud of myself, but also wondering why I had put myself through this. Why anyone did.

Even on the walk back to my hotel, I had to take breaks and sit. My legs were spent. Back in the hotel I met Florian, who had very wisely decided he was undertrained for the marathon, and had run 21km. Our hotel (Hotel Lyskirchen) graciously allowed us to have showers in the sauna area, even though we were already checked out. I vomited a bit, and didn’t feel like eating. The stomach problems lasted only a few hours, and Florian and I enjoyed a nice dinner back in Luxembourg.

I now have new found respect for anyone who finishes a marathon, whatever time they make. All the best for them. But I think I’m not joining the party. The race is too taxing, the preparation too demanding. Recreational running and the occasional race will be fine, as long as it doesn’t go above 21km.