This being my first year back in Europe, it remained to be seen if we would manage to make our traditional long hike. We kept exchanging email, and then Guillermo hit the right note - “How about Iceland?”. We quickly settled on the idea. I learned later that Guillermo had simply seen a “Come to Iceland” billboard in Boston. I never think those things work, but there you have it.

We met in Reykjavik in mid-August. JP flew from San Francisco, Frans from Amsterdam, Dmitri and Guillermo from Boston. I took the train to Brussels and flew from there. We met up in the hotel after midnight, and at 2am went out to look for food and animation. The Icelanders turned out to be very welcoming party people. We spent the next day planning, filling the gaps in our gear, and having our last proper dinner for the next few days.

On Sunday we took the bus to Landmannalaugar, the camp where we’d be starting the hike. We were to spend the night there, and only start the walk the following day. It was cold. Colder than any of us expected. We had to bundle up the whole time, which was a sign of things to come. 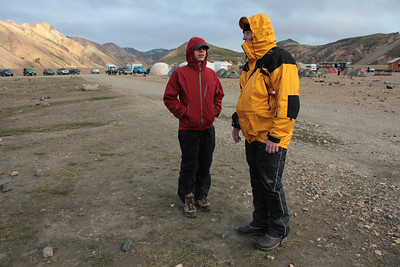 As we’d admit to each other a few days later, we all thought we were not prepared for these conditions. The day was saved by the natural thermal pool next to camp. We went in around 9, and only came out at about 11, to go straight to bed. A nice thing about being so far up north was that the summer days were long, and nightfall was around 11.

The next morning, the temperature was milder. Cold, but manageable. Things looked up, except for Guillermo, JP and Frans having spent the night in underpowered sleeping bags. We decided that it would be advisable to sleep in huts whenever possible, instead of using our tents.

The fist day of hiking, from Landmannalaugar to Hrafntinnusker, took us over arid terrain with lots of geothermal activity, and the fetid smell of sulphur.

At lunch time, the wind had picked up, and it was starting to rain. We donned our rain coats and rain pants, and put the rain covers on our backpacks – this was our arrangement most of the time for the next days.

After 12 kilometers of hilly terrain, we arrived in our hut. We had managed to book place for three people only, and since Dmitri and I had the best sleeping bags, we volunteered to spend the night in the tent. But the evening we spent together in the hut, talking and reading and playing chess. Long hours.

The second day started well. It was even sunny, and we decided to climb a hill to get a good panorama.

After the hill, however, we were haunted by intense rain that lasted a couple of hours, and we also came to our first river crossing to be done on foot. It was already cold, so having to stop to take our boots off and put flip-flops on was a nuisance.

After a hard day, we were rewarded with beautiful views, and room in the hut for all of us. An organized hiking group had a cook that had prepared lamb soup, and they were very kind to offer us the remains, which tasted much better than our bags of hiking grub.

On a sad note for the day, the intense rain proved too much for the water protection that Frans and I had set up for our SLR cameras. Frans’s camera got so wet that it became unresponsive for the remainder of the hike. Mine made it by a whisker, and I decided to banish it to the backpack, to benefit from more layers of protection during the day. From then on, all our photos were taken with point-and-shoots.

The third day was long (15km) and monotonous, although flatter than the previous two. We walked through landscapes of green grass mixed with black volcanic ash. The day also brought some impressive rivers, two of which we had to cross on foot once again.

We didn’t have a place in the huts that day, but luckily it was much warmer than in Landmannalaugar. I retired to bed at 8, and slept an impressive 12 hours, which I sorely needed. Guillermo and Dmitri stayed up late making new friends.

We were now on our fourth and final day of hiking, which took us through some beautiful scenery. Even though we were tired, we were also happy in the knowledge that we had a place in the hut awaiting us, and that we had made it through another adventure.

Of course, we had to take our traditional BRO photo:

A bit after our last river crossing, we got to the end ouf our hike.

We slept the sleep of the just in bunk beds.