I’m back in Seattle after some vacation. I wish I had more.

One of the things I wanted to do in Madrid was rescue the old Commodore VIC20 from oblivion in the garage. I’ve been reading a book on the history of Commodore, and it has stirred some memories. The VIC20 was the first computer we had in our family. I remember being very excited about it. Today, it is a quaint machine. 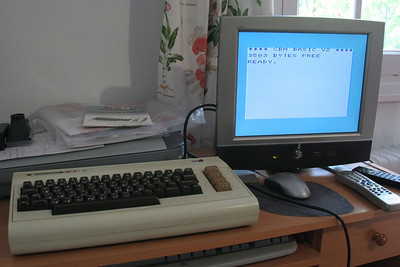 As you can see, there are less than 4K of memory. No hard drive nor floppy disk drive. No mouse (actually, that isn’t half bad). And yet, I have fonder memories of the VIC20 than of most of the computers I’ve used since. Why? One reason can be seen in this photo: 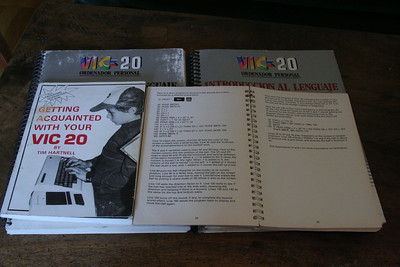 The machine came with programming manuals. We used it to play games, but we also tried little programs. The instruction manuals taught the BASIC language, and showed how to make sounds and images. Larger programming projects were almost always games. Javier wrote his own game, which I played often. We had clones of such arcade classics as Scramble and Frogger.

I don’t think the VIC turned me into a programmer. I never did much in it but copy programs from the manuals, line by line. Years later, with the Sinclair Spectrum 128+, I would try to write my own video game in assembly language, a project I quit in frustration. With the Spectrum, I also developed a dangerous addiction to games. One day I decided to let go of it, and my interest in programming and computers went to sleep for several years.

Today we have more powerful machines, but something got lost. Computers today don’t come with programming manuals or tools. They exist mainly for you to run your purchased software on. The world became less naïve. Really, was it realistic to think that people would use computers to write their own software?

I’m very happy the old VIC20 is still running. I typed a little program into it that bounced a ball off the edges of the screen. It was about 12 lines of code, and I was thrilled to see it in action.