[Note: if you want instructions on making yogurt, without the story, go here]

Today I bring you one of those stories about the triumph of the human spirit that Hollywood is so fond of.

In my previous post on yogurt, I had described the whole process I used to make yogurt, and some of its limitations. To sum it up:

You might have thought that, having found that ultra-pasteurized milk produced consistent results easily, I would have been satisfied and concluded my research. However, I am an obsessive fellow. My friend Tom once told me that all the computer programmers he knows have some form of OCD (Obsessive Compulsive Disorder), and I think he had a point.

I consulted Harold McGee’s On Food and Cooking, that fabulous encyclopedia. There is a detailed description on dairy products and yogurt making. It explains that the scalding of the milk previous to incubation, denatures the milk proteins in such a way that they form a grid that traps the whey. I noted that the “official” scalding process uses higher temperatures, longer, than pasteurization. Why then the search for the best milk, and the least treated?

The scalding process is also time-consuming. It would usually take me over 30 minutes to heat the milk to a simmer, all the while stirring to avoid burning, then transfer to a steel bowl, and put that bowl in a bath of cold water to cool down the milk as quickly as possible. Aside from the waste of time, there were two problems with the scalding. One was that, however carefully I did it, however slowly I heated the milk, the yogurt came out uneven, with some parts runny, and some curdled. Another problem was the skin that forms on milk when it heats. Not my favorite sight.

McGee, again, had an explanation for the skin on hot milk, and a solution. The skin is a combination of cream, proteins and calcium, that solidifies on contact with air. To avoid its formation, just whisk the milk until you have a layer of froth at the top, which prevents contact with the air. Presto!

The problems remained that I hated the constant stirring to avoid burning the milk, and that even when I stirred, the milk was unevenly heated. Then I had an idea. Getting a cast iron skillet had improved my steaks by conducting the heat more slowly and cooking the meat more evenly, without burning. Perhaps I could find a cast iron pot to warm the milk in, and use low heat. This was promising. I went to City Kitchens, in downtown Seattle, found that cast iron pots do exist, and bought one. My first Le Creuset - which seems to be the Apple of kitchenware. I also bought a fluid thermometer with a clasp, to start taking out the guesswork from my process.

With the new knowledge and the new gear, I set out to make yogurt from raw, or regularly pasteurized, milk, by scalding the milk over low heat, and keeping it under 150 Fahrenheit (65 Celsius). Once I took some measurements and timings, I was able to leave the pot mostly unattended. This was a step forward. The yogurt came out much more even, and with a milder texture. The milk skin problem was gone, and even the taste improved. Still, the yogurt leaked whey. 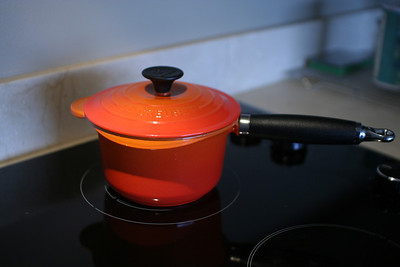 McGee had one last piece of information. According to his book, the incubation temperature plays a role on the texture of yogurt. The bacilli in yogurt thrive mainly in a range of temperatures: 90-110F, or 32-43C. On the hot end of the range, the fermentation is fastest, but it produces a coarse grid that leaks whey. On the cold end of the range, the fermentation is slowest, but it produces a finer texture that traps whey.

I had not tried this because my yogurt maker doesn’t have a temperature control. I looked around for other yogurt makers. Even the ones that have “gourmet” or “professional” in their name have no temperature control. Some people use ovens to make yogurt, and replace its light bulb with a 60W light to give out some heat, but I didn’t want to go that way. I did, however, run an experiment, and left a liter of raw milk fermenting overnight at room temperature (and it was cold by then). The resulting yogurt was very runny, but with no whey. Promising.

In another book, I found the suggestion of using a food dehydrator to incubate the yogurt. Food dehydrators have a temperature control that goes as low as 95F. This might be a solution, but I didn’t like the idea of getting another gizmo. Perhaps I could build an external temperature regulator, and control the yogurt maker with it. Or maybe such a regulator already existed. I looked and looked, but didn’t even know how such a device would be called. Perhaps my colleagues from work would know of the existence of such a device. Sure enough, one, Jim, keeps a kegerator (a refrigerator for beer kegs) in the office. Beer has an optimal range of temperatures it should be kept at, so the kegerator is basically a mini-fridge, and a temperature regulator. Aha! I took a look at the regulator in Jim’s kegerator, jotted down the brand and model, and ordered one over the internet.

I got it on Monday, and was glad to find that I needed to build the cables to hook it up to the power outlet, and to the appliance it is supposed to control - the yogurt maker, in my case. A nice little hardware project, which I finished on Tuesday. I now have the most precise yogurt maker I could ask for. I stick a temperature probe on a cup with water, inside the yogurt maker. When the temperature exceeds 90F, the regulator shuts the yogurt maker down until the temperature goes down to 85F. Then it turns it on again.

I immediately put my new setup to the test: I made yogurt from raw milk, not heated at all, with the regulator’s thermostat set to 90F (32C). The resulting yogurt was fantastic. A very smooth texture, a little runny but with no leaked whey to be found. The raw milk I buy comes from Jersey cows, and so has more cream content than most milk (which comes primarily from Holstein cows). All in all, this raw yogurt has great potential. 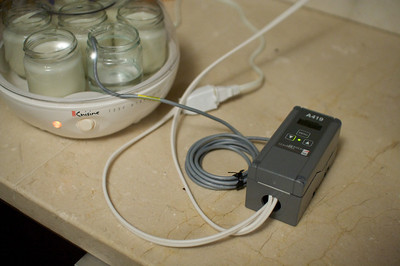 I think this concludes my “engineering” investigation of the lore of yogurt, but who knows?