[Note: if you want instructions on making yogurt, without the story, go here]

I’m about to begin a discussion of the parameters in yogurt making, and get into technicalities. You may want to skip down to the paragraphs that surround the photo, unless you enjoy food geekery.

The basic process of making yogurt is pretty simple:

Here is a detailed guide on making yogurt.

There are four parameters you can control when making plain yogurt:

I am not able to play easily with the incubation temperature. The incubation temperature is important because the lactobacilli that ferment the milk, grow best in a certain range of temperature - 38 to 43 Celsius, or 100 to 110 Fahrenheit. According to Harold McGee’s encyclopedic On Food and Cooking, this temperature produces rapid gelling of the yogurt but also gives it a coarser texture, whereas cooler incubation temperatures, say 30 degrees centigrade, produce a very slow fermentation, but a finer texture. In any case, my yogurt maker doesn’t give me the option of adjusting the temperature, and I’m not curious enough to set up a lab in the kitchen.

The incubation time varies widely depending on where you read from. Usually you’ll read it’s about 6 to 8 hours. Elaine Gottschal’s book (see my previous post) specifies an incubation time of 24 hours, to ensure that all the lactose has been consumed by the lactobacilli. I follow this, though I have also experimented with 12 hours of incubation. The longer incubation period makes the yogurt slightly tarter and firmer, and has positive impact overall, in my opinion.

The starter can be either a spoonful of commercial yogurt, or freeze-dried starter cultures. Commercial yogurts, and starter cultures, contain several strains of bacteria: at least Thermophilus and Bulgaricus, often Acidophilus and Bifidus. Gottschal’s book warns against bifidus, and several people in the online communities that follow her diet (again, see previous post) say that they’ve had intestinal trouble when they’ve eaten yogurt with bifidus repeatedly. This means that I always read yogurt labels to find exactly what cultures they use. A few times in Union Square’s Farmers Market, I asked producers of yogurts what cultures they were using. Invariably, they did not know. It is not difficult to find yogurt without bifidus. It is however, very difficult to find natural yogurt. Almost all commercial brands contain some sort of sweetener or gelling agent. Tartnes is impopular.

I’ve tried using several yogurts as starters, and I found the flavor of the yogurt I got was mediocre. I have much better luck with starter cultures, so that’s what I use; generally, Yogourmet, which you can buy at Whole Foods.

The most important factor in yogurt is the milk. There are several questions here: whole or skim? pasteurized or raw? homogenized or not?

I refuse to buy skim milk, so I’ve never made skim yogurt. In fact, extra cream won’t hurt either, and will make the yogurt milder and creamier, as one would expect. I’ve made yogurt out of half-and-half, and it had a thick, creamy consistency, and a sweeter flavor than whole milk yogurt. Similar to Petit Suisse, if you’ve had those.

I should also point out that you can use the same tools and process of yogurt making to make fermented cream (which the French call creme Bulgare). It gives the cream a nice extra flavor. This is not the same thing as creme fraiche. Creme fraiche uses different bacteria strains, and incubates at cooler temperatures. But as with yogurt, you can make creme fraiche by addind a spoonful of existing creme fraiche to your cream, then letting it ferment at room temperature for a day.

One thing about the process of making yogurt kept annoying me. Most books and articles say the milk needs to be boiled, to kill some bacteria that would interfere with the fermentation. But isn’t pasteurization supposed to do that already? I experimented with not boiling the milk, and the result was runny yogurt that leaked whey. The whey gave it a taste that I did not like, so I settled on heating the milk gently for 12 minutes. Still, I didn’t believe the part about boiling killed bacteria that interfere with fermentation. In my view, it had to be that the boiling was eliminating some water. According to Harold McGee, the heating denatures the milk protein in such a way that it forms grids that lock the whey.

At the same time, mom had started making her on yogurt, and did not need to boil the milk in order to get good texture. We made tests, and found that this effect was not due to the different cultures we used. We were using very similar yogurt makers, and were incubating for the same amount of time. It had to be something in the milk. In my last holiday in Madrid, I tested several milk brands, and with all, the yogurt came out fine without boiling the milk. Hmm, that was puzzling. Perhaps the milk in Madrid has less water content, I speculated.

When I moved to Seattle, I was happy that I could buy raw milk - it is legal in this state. I tried to make raw milk yogurt, and again found it runny and leaking whey, and again I started boiling the milk. One day I noticed the supermarket carried ultra-pasteurized Organic Valley milk. That is a brand I like. I had generally avoided ultra-pasteurization, since I err on the side of less processing, but I gave it a try, and, bingo, the yogurt came out fine, without heating the milk. In fact, the yogurt is better this way than when I heat the milk. Heating the milk at home means heating in a pot, on the stove top. Even stirring all the time, it is inevitable that the heating of the milk is uneven, and some parts get scalded. When I heated the milk, I would get a curdled texture for my yogurt. With ultra-pasteurized milk, I get a smooth, even, custard-like texture. I think those milk factories do a better job of heating the milk than I do.

This also may explain why the milk in Madrid needed no heating. Pasteurization is a standard enforced in each country or state, and it’s possible that pasteurization in Spain is more intense than in the US. But of course, that’s just speculation.

So, hip-hip for modern times. At least when it comes to yogurt, they made milk much better.

The yogurt I make at home is much better than most available in stores. Generally, I make plain yogurt, but when I get good raspberries, gooseberries, blueberries or other berries, I often throw them into the yogurt. It is especially effective to make them into a puree with a blender, because that allows you to throw in more quantity, and give the yogurt a stronger berry flavor. By the way, the berries, or berry puree, are added to the yogurt after fermentation. I haven’t tried to add them before, but I don’t see the point. In the worst of cases, the lactobacilli may digest the fructose in the berries and make them tarter, or proper fermentation of the milk may be prevented. In the best of cases, the flavor will be unchanged from adding the berries after fermentation. All the sources I’ve read recommend adding the fruit, or the honey, after fermentation. 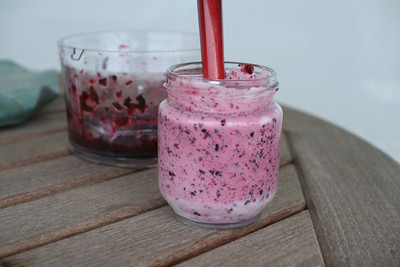 I’m pretty happy with the yogurt I make, but it’s not the best I’ve had. That merit belongs to White Cow Dairy, which has a level of refinement I cannot reach. I contacted the owner once, and he told me his secret was to start out with great milk, and then do as little as possible to it. I have no clue what he meant.

In the New York area there were several farms that would make their own natural, artisanal yogurt, like Evans Creamery, Ronnybrook, Old Chatham Sheepherding Company, or the aforementioned White Cow Dairy. I have found local yogurts here, but not artisanal yogurts. There is a French family in San Francisco that apparently makes fantastic stuff. I’ll have to check them out next time I visit. In Seattle, however, my home made yogurt is the best game.