Adventures in my garden

The year I came back to Madrid and bought my house, 2014, I also planted a strawberry tree (madroño), which I bought from a nursery in the nearby town of Valdemorillo.

Strawberry trees – which don’t yield strawberries – flower and give fruit in autumn, though not necessarily every autumn. The flowers and fruits appear in alternate years, as I understand.

Now, my little tree has been growing well, but has not so far given fruits or flowers. When I bought it, it had none either, while other saplings in the nursery did have fruits. The person in the nursery told me not to worry, and he still recommended this one, which was a bit larger and looked robust.

This year has been very rainy, and the summer has (until just this week), been cooler than usual. My little tree seems to be preparing for its first batch of flowers. Small and tender red branches have been growing downwards from the tops of the tree:

I think they are harbingers of flowers, and I have seen these small red branches in some of the older strawberry trees in my neighborhood. I think the extra water has finally given the tree a push, or maybe it was just its time. In any case, I’m looking forward to autumn.

In recent weeks, a cat has been spending its mornings in the garden. I feel some pride that the cat likes it here. I like to think this is partly due to my un-fussiness. I’m letting the weeds grow, and there is plenty of shade. Other gardens in my block have swimming pools, terraces, or nowhere-to-hide lawn. 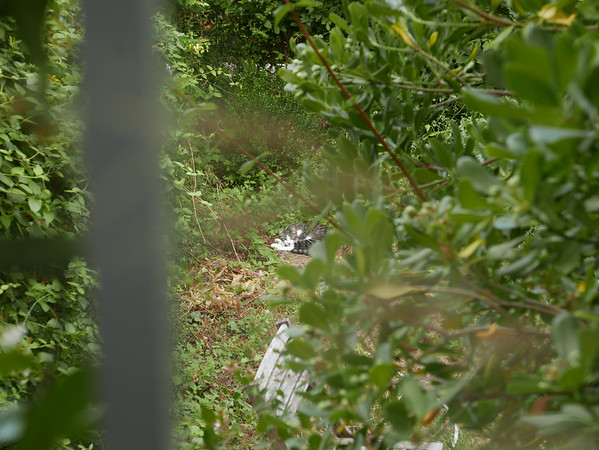 Last year, I found one dead rat, and later another, under the strawberry tree. It was odd that the neighborhood cats had chosen that spot to leave the carcasses. Being un-fussy, I decided that it would be good for the soil if the rat decomposed on it. I pushed it slightly out of sight, and that was that.

This year I had a barbecue with my frieds to celebrate my birthday. Ivan was the grill-master, and the six of us walked around the garden, and left the lush April grass well stomped and flattened. It has stayed that way since.

In previous years, I mowed the grass before the summer, to avoid having lots of dried brown grass sticking up, but this year, given the flattened grasses, I have decided to let the weeds grow unfettered. I’m impressed with how tall they’ve been growing. One nettle (I think) is about my height now.

The thing is, my garden is greener than previous years, thanks to the weeds. Perhaps it’s just the raininess of the year, I can’t be sure.

I have sympathy for weeds. I like the quote:

A weed is a plant that has mastered every survival skill except for learning how to grow in rows.