A few months ago, I had a phone call from my landlord. He had realized he had been paying the electricity bill, which was supposed to be my duty. Neither of us stay on top of our money, obviously. I payed him back for past bills, and set up an account with Seattle Light.

My landlord remarked that I had a very low bill. This was a surprise. A lot of the time I’m home, I’m watching a DVD, or listening to music while playing with my laptop. I had been reading about amplifier technology, and had found out most amplifiers, mine included, are energy-inefficient. I assumed I would be power-hungry, for a single person that is.

I discovered, a long time ago, that several of the power outlets in my living room can be switched on/off from one wall switch, and I put all my computer and internet gear on those outlets, so that I can shut down properly when I go to bed. The hifi set and the TV, however, sit in an area of the room where the outlets are always on, and unplugging the power strip to which they’re connected is not something I want to do daily. 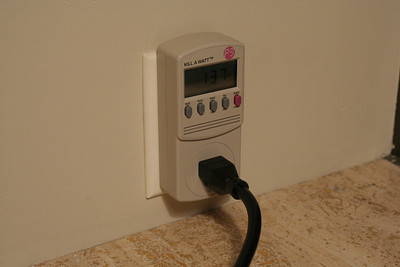 This little box will tell you how much current, voltage and energy your equipment is drawing. To my great surprise, the news was almost all good.

Very surprising, especially when considering that watching a DVD will draw 120 watt. Not far off from reading at night!

Some figures were not as good:

The most annoying was the Apple TV, a piece of equipment that hasn’t quite lived up to my expectations. Still, the solution was easy. I had a spare power strip, which I connected to the big strip I use for hifi/tv. The AppleTV is connected to it, and I switch the strip on/off as needed. I don’t want to put the amplifier on the same strip, though, because that would mean the Apple TV is on almost all the time I’m in the living room.

Now my hifi/tv corner consumes 16 watt when idle, instead of 45. Not as good as 0, but for the moment it will do. I feel much better now.