For the first few months of this year, and the last of last year, I was having an infestation of pigeons in my terrace. It all began innocently enough, with pigeons roosting on the railing. Then more came, and stayed often, while the weather was getting colder. They liked to roost on the large window frame, as you can see in this photo taken in April: 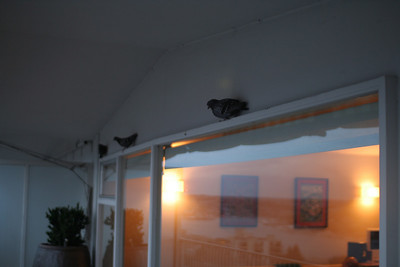 I thought it was nice to host birds, and although they would make a lot of noise sometimes, I was fine with that. Up to five pigeons at a time would come. As the weather started warming, and I wanted to spend more time in the terrace, I noticed the whole place was filled with bird excrement. They had gone too far. My landlord came to the apartment one day, and suggested that I get bird spikes. These are spikes you put on birds’s roosting spots to make them uncomfortable.

It was a very good idea. The day I installed the spikes, I watched as the pigeons tried to land on the window frame, but could not comfortably. A couple were able to land, but flew away after a second. By the third day, most of the pigeons had gone elsewhere. 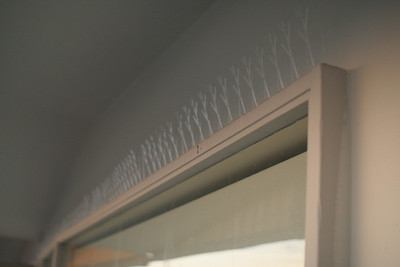 One day, I realized that a fat pigeon was sitting in one of the plant pots, unmovable. I tried to shoo it away, but it wouldn’t budge. I figured it was guarding eggs, and I left it alone. Over a month passed since then, and the building’s board have hired a team to wash and paint the terraces. Last week it was my place’s turn, so I had to put the deck chairs and the table inside the apartment, and move all the plants to the center of the balcony, so that the windows could be accessed. I also took the chance to clean up, ahead of the painters pressure-washing. Now the terrace is very clean. While I was moving the pots, I found a dead pigeon in a corner, and I realized there were two pigeon chicks in one of the pots. I didn’t know what to do. Rick, the building manager, had found a nest earlier on, and had destroyed it and disposed of the eggs. In his view, the pigeons are a pest, like rats. I couldn’t bring myself to killing the chicks. I’ve decided to let them grow up, but when they fly, I’m getting rid of the nest, and making sure they don’t find it comfortable to stay here. 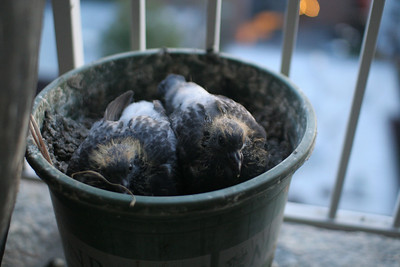 Pigeons are indeed a pest. In the week since I moved the pot-nest out of the painters’s way, the birds and their mother have dirtied things: 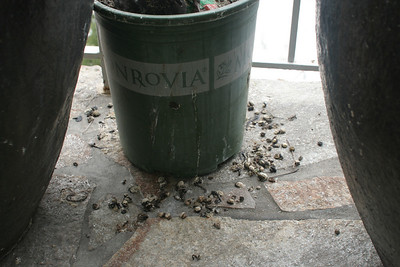 Not happening again, my feathered friends. All this pot moving and terrace cleaning has had some interesting effect. I generally don’t see much point to having plants on the terrace. They’re a hindrance more than anything. But now that they’re in the center, watching the view through them is nice. I think I’ll make some changes when all the painting is done. 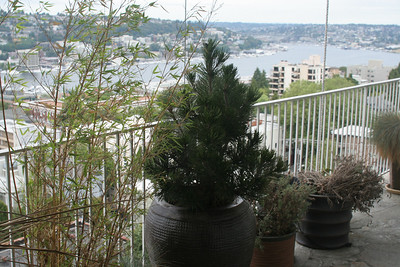