Seattle was not prepared for the onslaught of snow this holiday season. There are not enough snow machines in the city, and the airport is similarly optimistic about the weather. This season gave us the worst weather in many years. Some say 17, some say over 30.

All of this happened during the days I was traveling home. Now it is fun to remember the chaos: spending the night before my flight in a hotel by the airport, navigating a SeaTac brimming with people who needed re-ticketing, missing my connection in Newark and having to spend the night there. On my flight back, having to make a stop to refuel and defrost, waiting over an hour for baggage, waiting again over an hour to get a taxi. All throughout, dealing with the harried airport staff, who often displayed good intentions, but had been outwitted by the events. 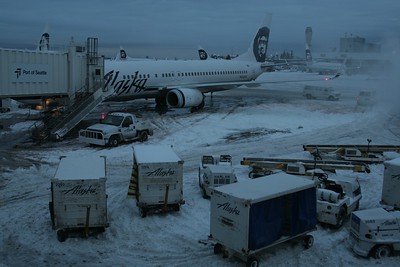 People were elated to make it through the madness, though, and let their guard down. I had my most interesting flight neighbors to date - in the Seattle-Newark flight, an electrical engineer turned carpenter, in the Newark-Madrid, a lady from Michigan going to spend Christmas with her Spanish grandchildren, and a Spanish mechanical engineer working for Audi in Silicon Valley. Unlike most flights, our minds were set in the present moment, and the present location, and that made all the difference.